The University of Texas at Austin Energy Institute Study: “No evidence of groundwater contamination from hydraulic fracturing”

The Energy Institute at The University of Texas at Austin recently conducted a study entitled "Fact-Based Regulation for Environmental Protection in Shale Gas Development." Dr. Charles Groat, the lead author of the study, communicated the following study conclusion as part of the information release: "We found no direct evidence that hydraulic fracturing itself—the practice of fracturing the rocks—had contaminated shallow groundwater."

The study notes that emissions from shale gas development are "significantly less than the contributions from other sources" in urban drilling environments, and linkages between fracturing additives and health problems "have not been scientifically established" (p. 76, 78). Furthermore, with respect to safety and regulations, the authors note that, in many cases, "companies are implementing practices that exceed regulatory requirements" (p. 90).

The study also came to an interesting conclusion concerning previous violations of shale gas regulations: By an overwhelming margin, most violations are procedural or minor without any environmental impacts, a far cry from the doomsday headlines that opponents conjure up. According to the study:

"Generally, this information suggests that many of the violations are procedural and represent no environmental effects; are minor with no effect – meaning that an inspector noted a flaw in a pit or casing job, for example, but did not note any release of contaminant to the environment as a result of that flaw; or represent minor effects, such as small releases (p. 50)."

The UT study looked at media coverage of hydraulic fracturing and shale development and found a disturbing negative media bias. "For the nation as a whole," the authors wrote, "the attitudes were found to be uniformly about two-thirds negative."

The table below summarizes the tone of media coverage as analyzed by Energy Institute researchers: 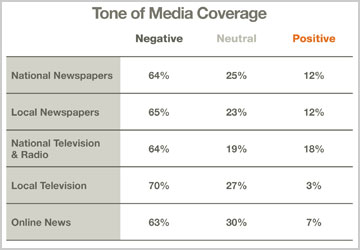 Here in the Barnett Shale area, media coverage has displayed a similar bias. The study found that of 237 articles written by metropolitan newspapers about the Barnett Shale, 159 were negative about the subject (Chapter 3, p. 16, Table 1b).

On the issue of media coverage and the public's knowledge of hydraulic fracturing, the study concludes:

"The evidence that media coverage on hydraulic fracturing does influence knowledge acquisition should allow policy makers to better understand how to reach relevant publics on such a complicated topic. It also should alert policy makers to the fact that much of the information being reported is not based on, or at least referencing, scientific research and in many cases reports on the negative consequences associated with hydraulic fracturing. If the public is going to be able to accurately understand the impact, positive and negative, that fracturing has on society, it is imperative that media coverage represents the breadth of issues associated (p. 36)."

Overall conclusions of the UT study are that, in spite of the excessively negative media coverage, there has been no documented evidence of hydraulic fracturing contaminating water tables. The UT study does note that there can be potential problems with casing and cementing, and surface spills. This is important because such problems are not fatal flaws but potential issues that can be easily addressed.