Barnett Shale air is the most monitored in the nation

It may not be widely known, but the air in the Barnett Shale area of North Texas is the most monitored air in the U.S. The Texas Commission on Environmental Quality (TCEQ) has installed a system of 15 permanent automated gas chromatograph (AutoGC) stations in the Barnett Shale area that take air samples every hour, 24 hours a day, 365 days a year. The data is available to the public online. In addition to these AutoGCs, TCEQ also operates a network of volatile organic compound canister air sampling stations that also take air samples.

As shown in the nearby map, the AutoGCs are strategically placed all over the Barnett Shale area, especially in the areas with higher concentrations of natural gas wells. The oldest monitor, located at Fort Worth Meacham Field, has been in operation since 2003. The newest monitors, Joe B. Rushing, Benbrook Lake and Elm Fork, were established in late 2013. 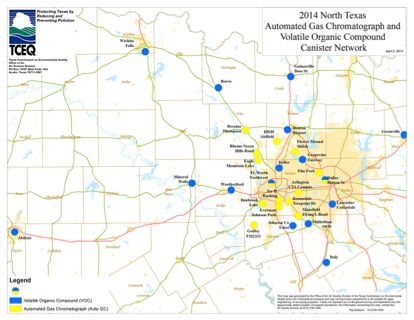 A Houston-based environmental engineering firm, ToxStrategies, Inc., studied the air sampling data from these monitors. The data included some 4.6 million air tests from seven monitors at six locations for up to 105 volatile organic compounds (VOCs) measured at each site, for periods dating back to the year 2000. The results were published in the peer-reviewed journal, Science of The Total Environment.

ToxStrategies found that none of the air tests had ever shown levels of potentially dangerous chemical compounds:

“The analyses demonstrate that, for the extensive number of VOCs measured, shale gas production activities have not resulted in community-wide exposures to those VOCs at levels that would pose a health concern.” (Page 832)

These findings are significant because the TCEQ air-monitoring network is the most extensive in the U.S. and the Barnett Shale is one of the top domestic natural gas-producing fields. These results are also important for other natural gas fields:

“With the high density of active wells in this region, these findings may be useful for understanding potential health risks in other shale play regions.” (Page 832)

“When the findings of the current study are considered along with the findings of other studies, including the comprehensive biomonitoring study conducted in the Barnett Shale region, the body of evidence demonstrates that shale gas production activities have not resulted in community-wide exposures to those VOCs in air at levels that would pose a health concern, despite the dramatic increase in shale gas operations in the region over the last decade.” (Page 841)

These findings are especially important because the underlying data was collected over a long period of time, during which Barnett Shale natural gas wells were drilled, hydraulically fractured, produced and reworked. In other words, the emissions from every type of natural gas-related activity were captured during this long time period.

It is worth reiterating that the most extensive air monitoring that has ever been conducted in a shale gas field shows that drilling, fracturing and producing natural gas wells does not result in levels of air emissions that would pose health concerns.