According to the EIA graph, while all sectors show increases in consumption, except residential, the growth is driven primarily by electric power generation. Interestingly enough, the EIA states: “Natural gas use for residential space heating declines as a result of population shifts to warmer regions of the country and improvements in appliance efficiency.”

But where will this natural gas come from? The EIA says it will come primarily from domestic shale gas deposits. The EIA expects shale gas production to more than double, from 9.7 Tcf in 2012 to 19.8 Tcf in 2040, and with increased development of tight gas and offshore natural gas resources, they show a 56 percent increase in total natural gas production from 2012 to 2040. 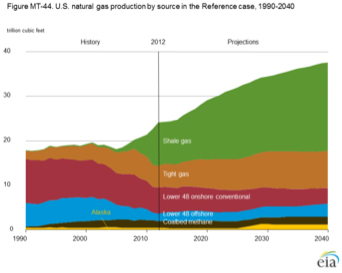 While the largest increases in shale gas production are expected in the Marcellus Shale in Pennsylvania and surrounding states, the Barnett Shale will continue to be one of the largest shale gas-producing regions in the country.