Understanding the Use of Vapor Recovery Units

People often question why vapor recovery units (VRUs) are not required for natural gas wells in Denton and others areas of the Barnett Shale. The answer is twofold. Firstly, VRUs are designed to capture vapor from liquid storage tanks used in the oil and gas industry. Secondly, the natural gas produced in many parts of the Barnett Shale is “dry,” meaning that little condensate or liquids are produced – so liquid storage tanks are not always present. In many cases, if a well does produce condensate, it is usually minimal and only in the first four to six months of a new well.

VRUs – which are large skid-mounted equipment containing many components, including compressors – are designed to be connected to liquid storage tanks. Exterran, a VRU manufacturer, describes the equipment and its use: “Our vapor recovery system employs compression to recover vapors from condensate and natural gas liquid (NGL) storage as an alternative to flaring or venting to the atmosphere. …The VRU is connected to your storage tanks or VRU towers containing condensate or NGL.” 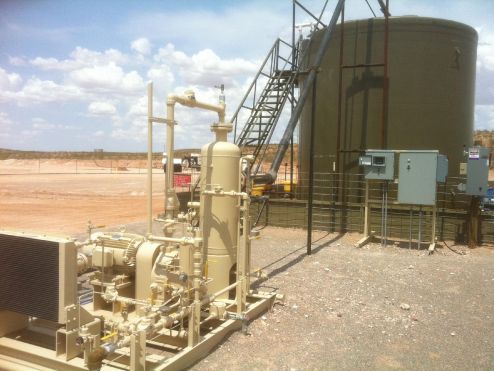 In relation to Denton, Texas, there aren’t sufficient amounts of natural gas condensate produced from natural gas wells (except in a small number of cases) to make VRUs feasible. The Texas Commission on Environmental Quality (TCEQ) air permit records will show that most sites in Denton either have naturally low emissions (due to dry gas) or emissions are being abated using enclosed internal combustion units – eliminating the need for emission control devices. With the Environmental Protection Agency’s New Source Performance Standard (NSPS) Subpart OOOO federal regulations (Quad O) being triggered – greater than 6 tons per year (TPY) per tank – compliance is still being achieved through enclosed internal combustion units, not VRUs. Furthermore, several mid-stream companies in the Barnett Shale require pipeline pressures too high for VRUs’ electric or natural gas compressors, further necessitating the use of enclosed internal combustion units.

The TCEQ does not require the use of abatement devices for those sites with emissions below 25 TPY; however, some operators find it beneficial to use abatement devices, such as enclosed internal combustion units, to maintain permit by rule status to minimize the cost associated with regulatory oversight of the higher tier TCEQ Title V permits for major source. Denton natural gas wells that were in compliance with TCEQ rules and still in compliance with NSPS OOOO rules had emissions that were already under 25 TPY for pad sites and 6 TPY for storage tanks.

The low emissions from “dry” Barnett Shale natural gas wells have been confirmed numerous times over many years. The TCEQ operates 15 air monitors in the Barnett Shale, one of which is in Denton. A 2013 study by ToxStrategies, Inc. analyzed 4.6 million of these air tests and did not find a single test that exceeded any health-based air standard. The City of Fort Worth commissioned a comprehensive air study in 2011, which found no air emission problems at gas well sites. The town of Flower Mound has been conducting monthly/quarterly air tests since 2010 and has never had a single test show levels of VOC that exceeded any health-based standard.